104 million people watch Charlie Rose on television each month, but the show was struggling to gain similar traction online. We partnered with the Charlie Rose team, as well as Pentagram, in an effort to close this gap—launching the new CharlieRose.com just in time for the program's 25th anniversary.

We worked with the visual identity established by Pentagram, extending it to create a design system optimized for digital, and we built a home for the show's newly digitized archives, totaling over 12,000 interviews. The resulting website offers users unprecedented, unrestricted access to a quarter-century of the most interesting conversations in the world.

The previous website undersold Charlie Rose's influential voice in the American cultural conversation and failed to offer users the show's full breadth of content. We approached this challenge by focusing efforts on the creation of a bespoke video platform: our custom-built solution emphasized performance and responsiveness across all devices and included a player unique to Charlie Rose that featured simultaneous video and transcript viewing. Our focus on customization extended to the user, too—offering them contextual recommendations, for example, and the ability to create personal watchlists.

Since the relaunch, average session duration increased by 461% and pageviews by 105%. 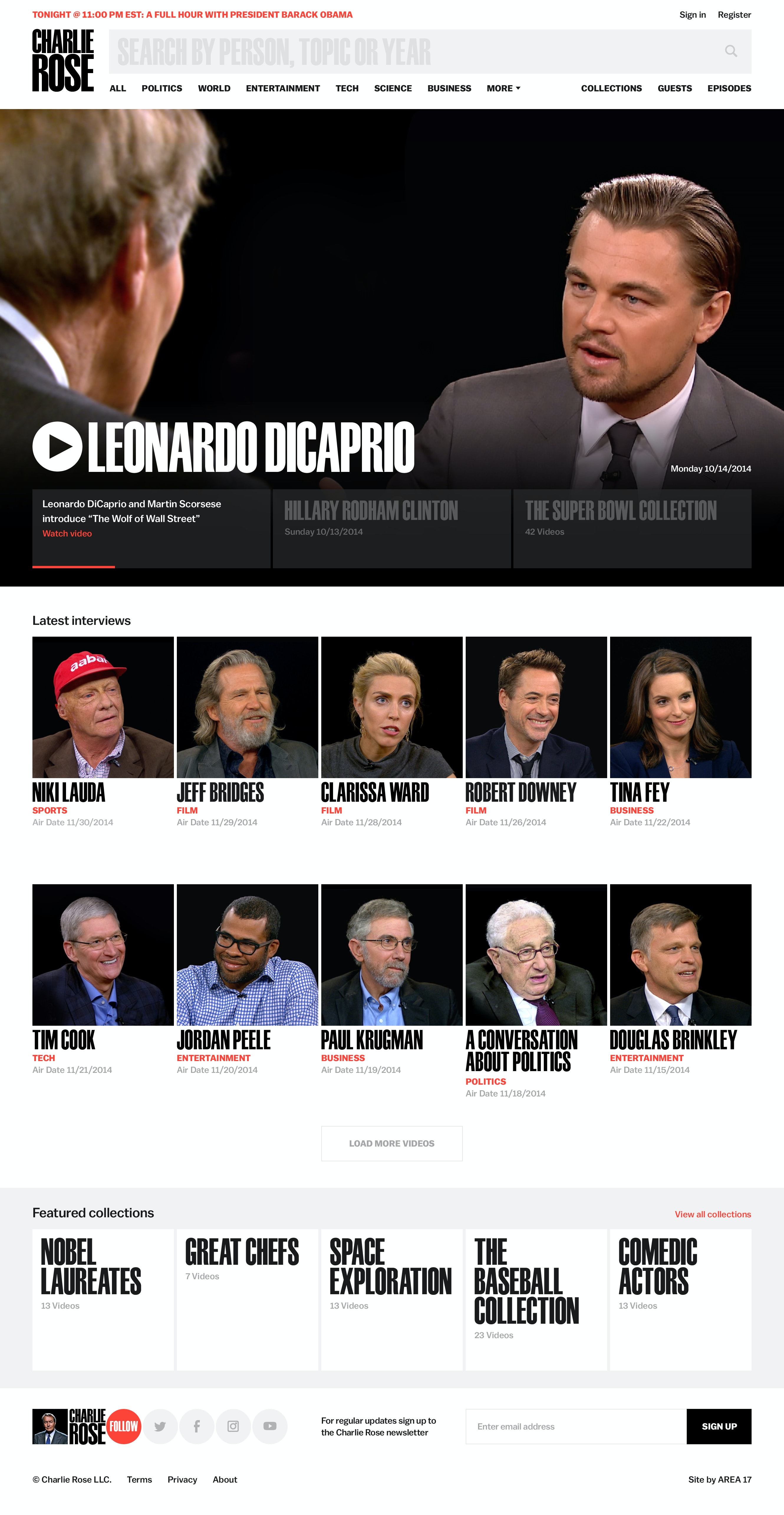 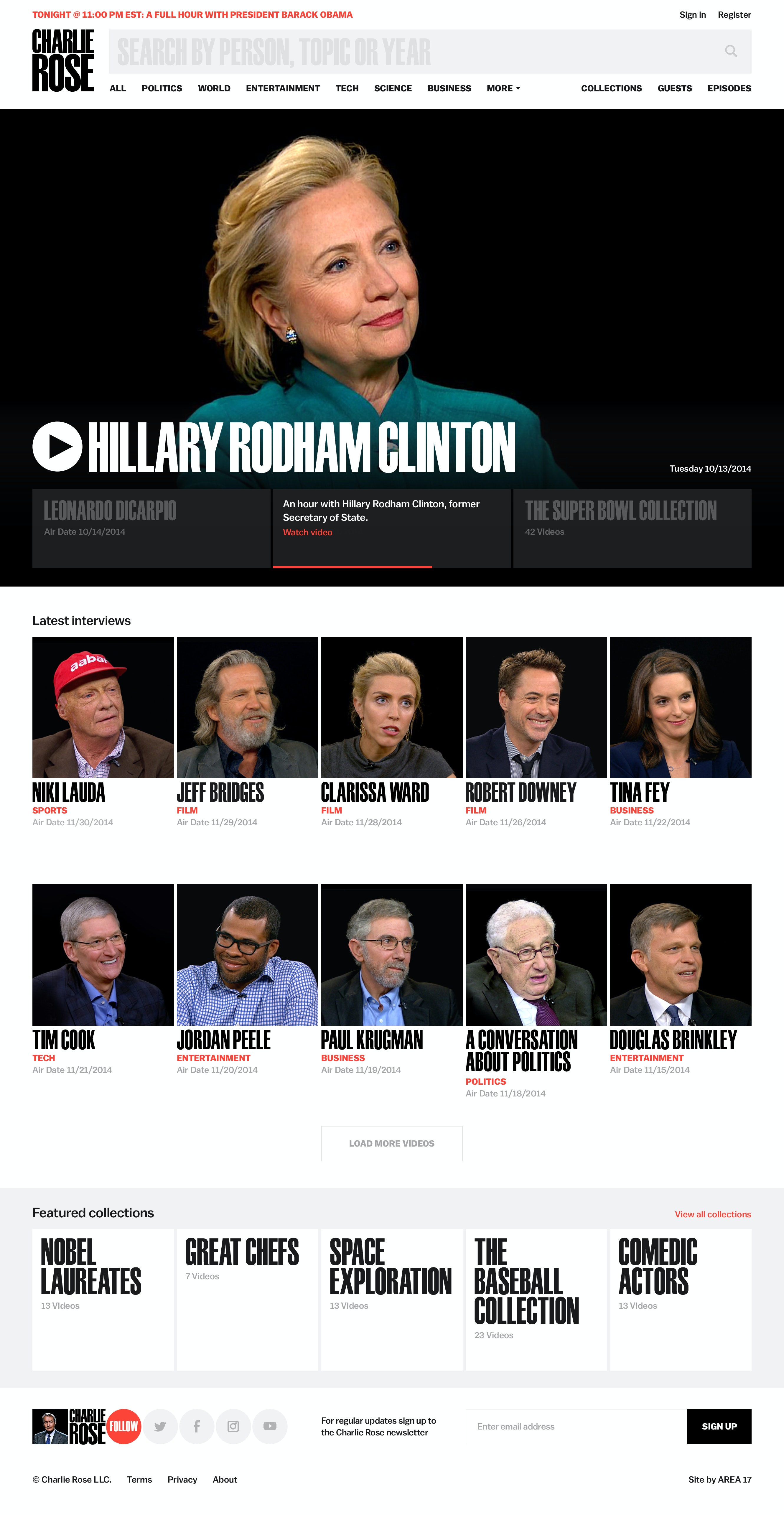 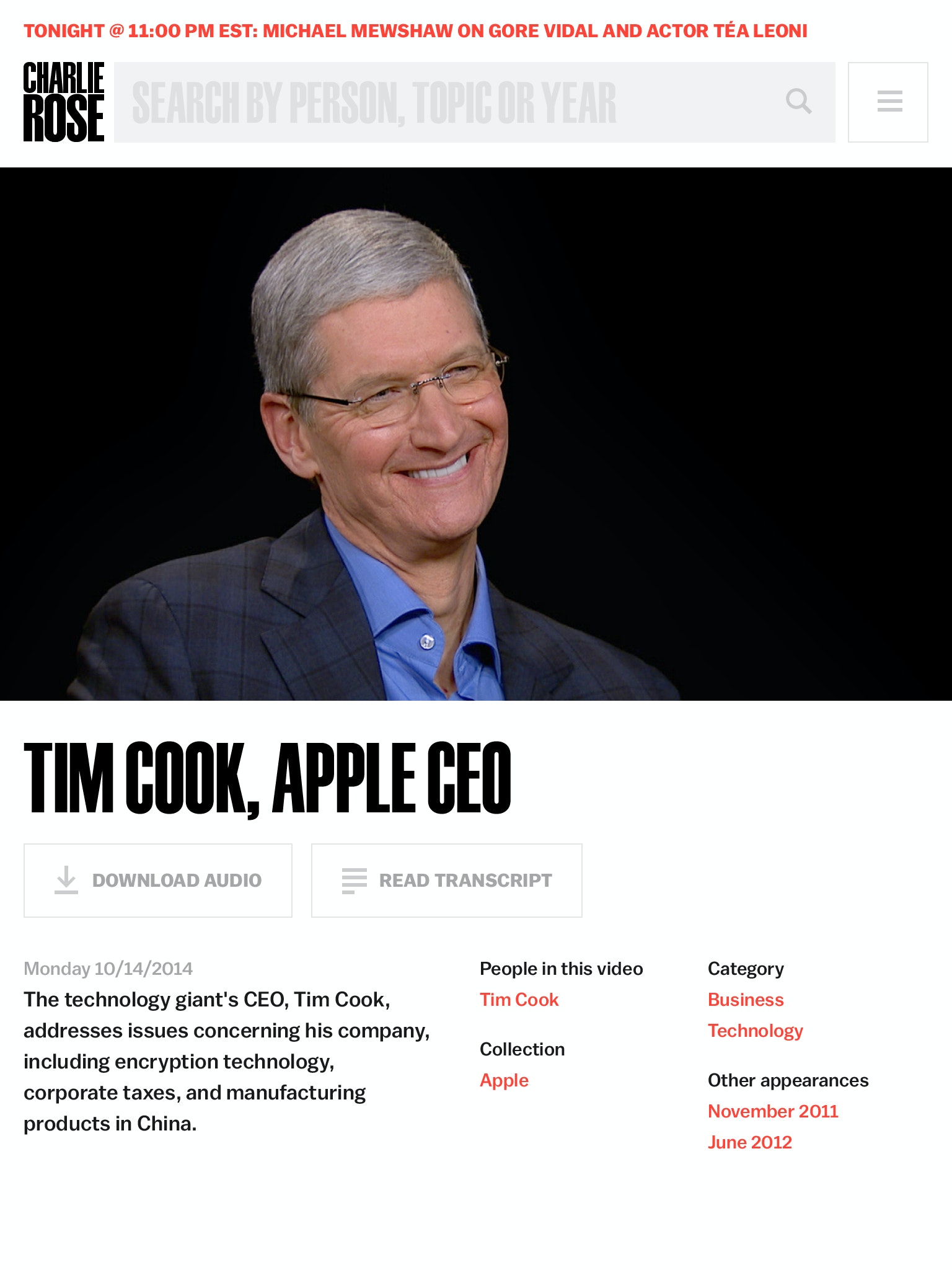 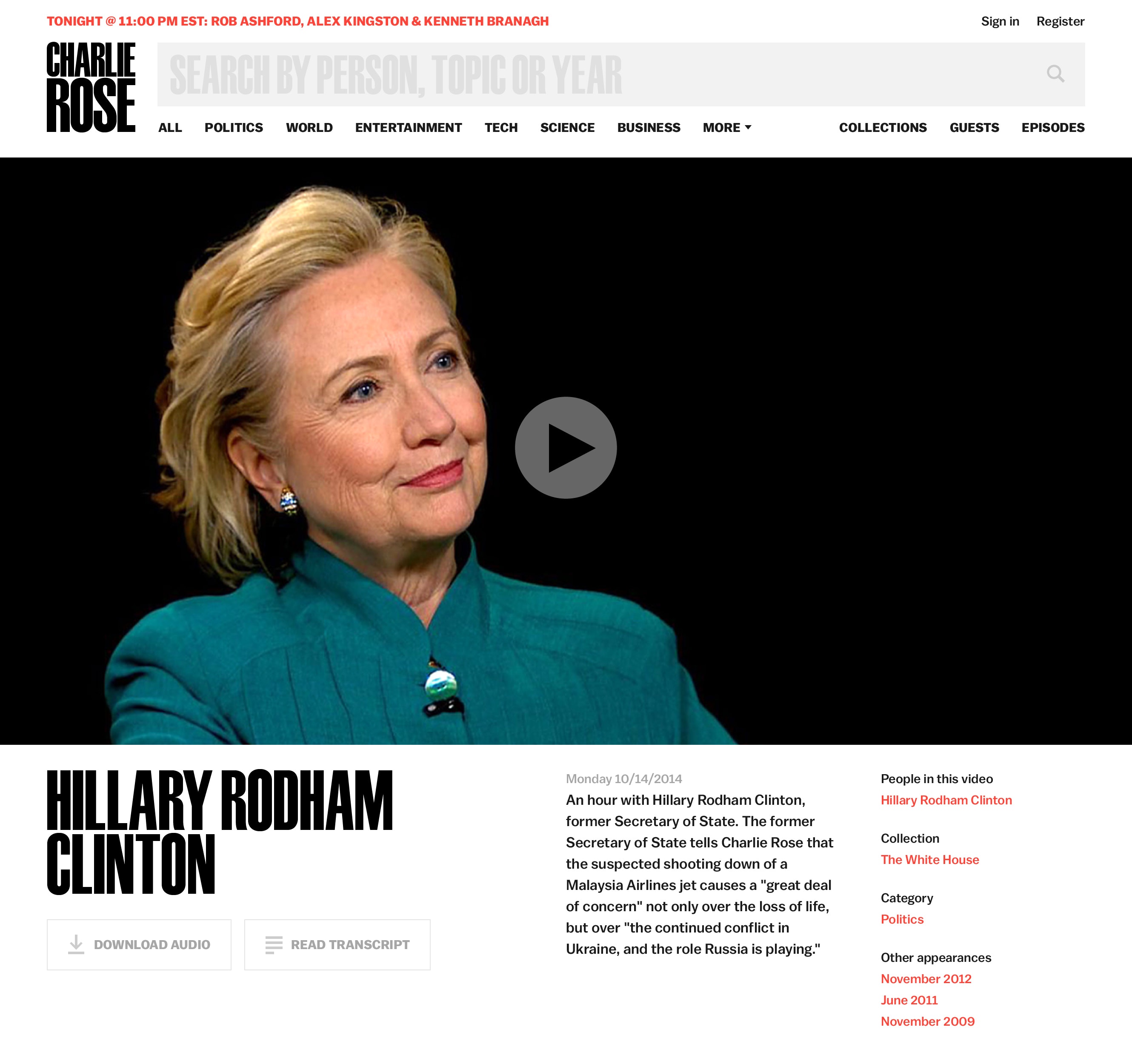 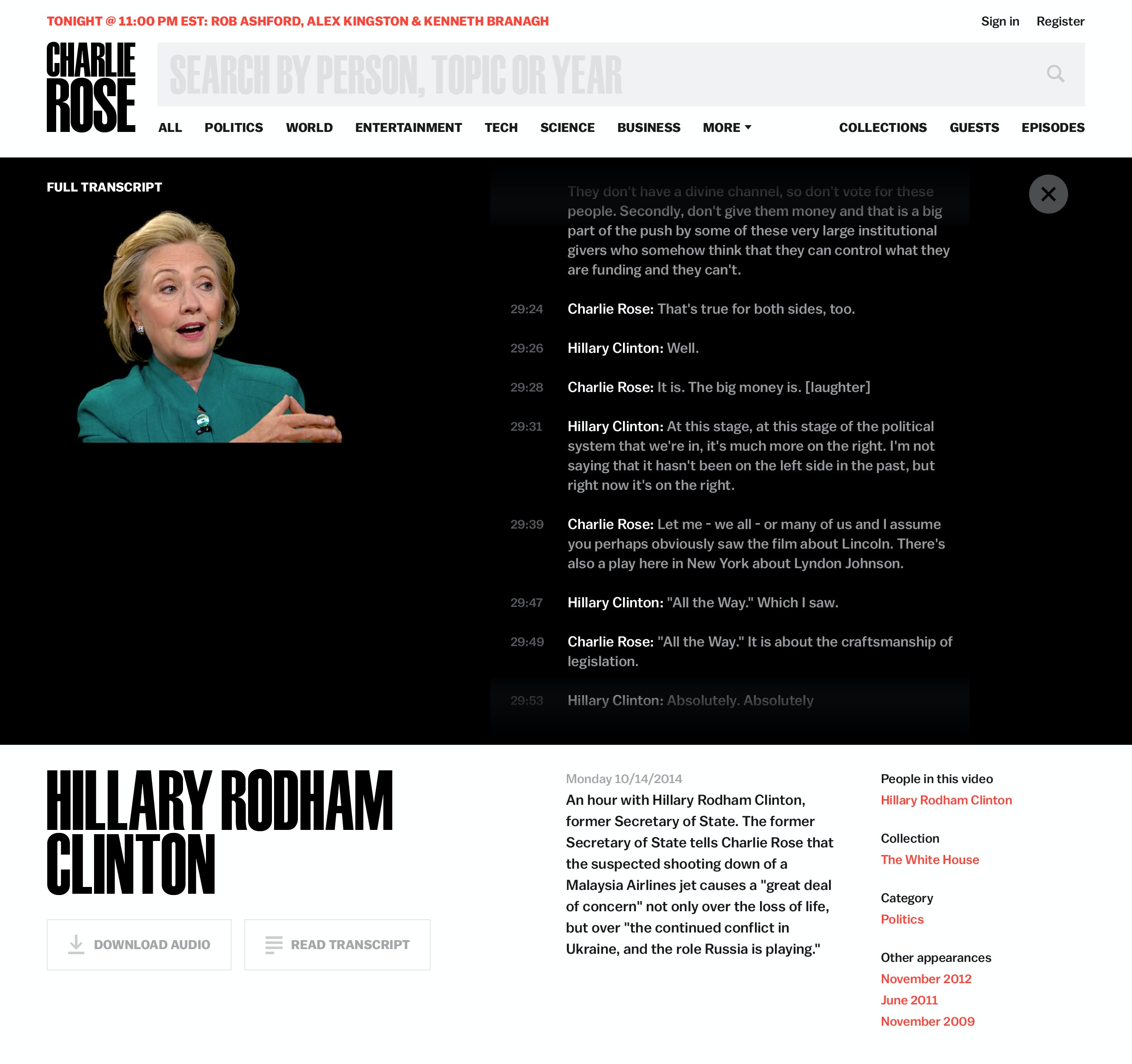 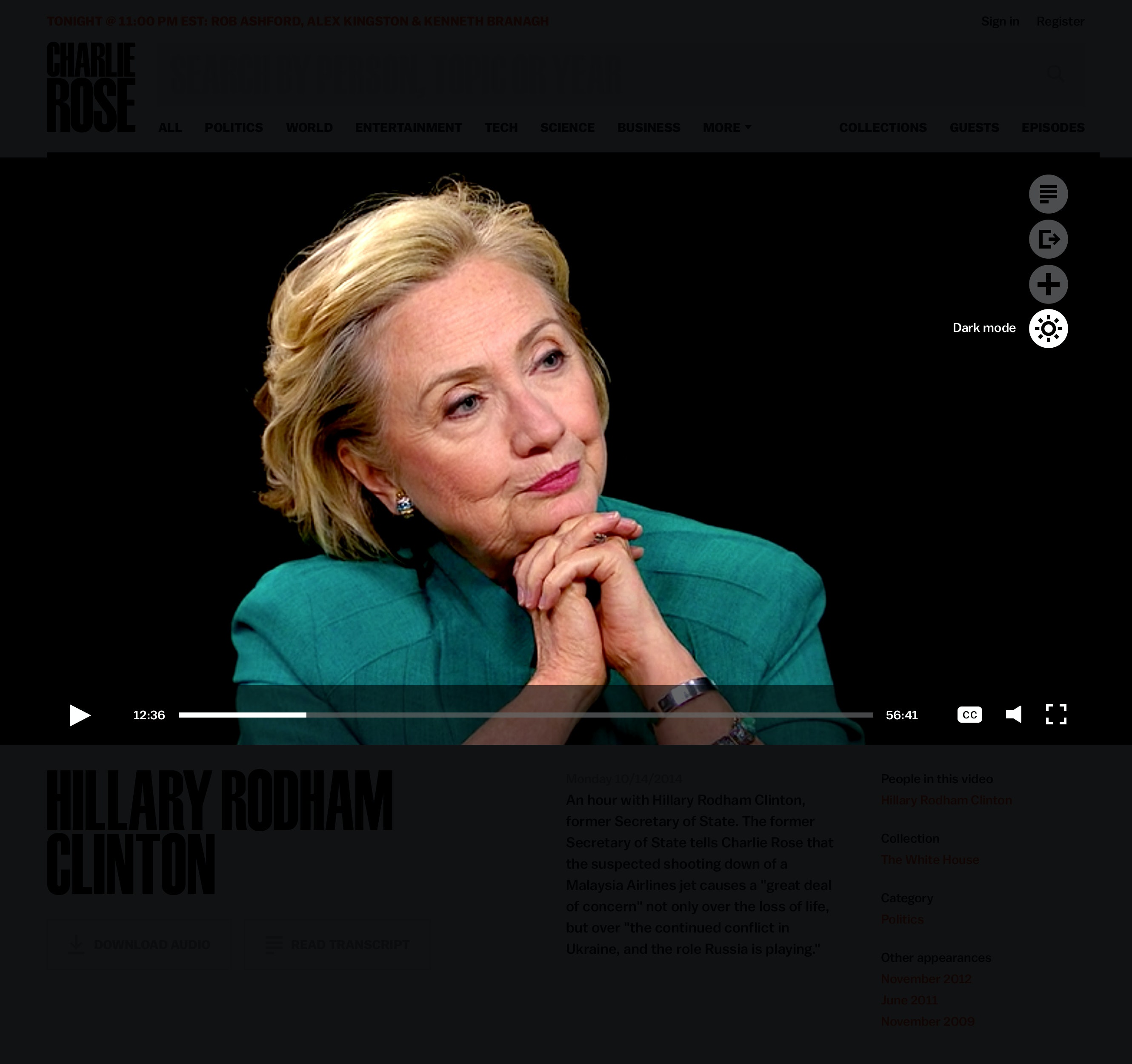 We built the new site on a custom CMS using Ruby on Rails designed to be scalable and sustainable. Videos, captions, and transcriptions are integrated from the Wazee Digital Media Library content provider and streamlined for playability across devices, including smartphones. A tailored video player was built in order to support transcription positioning and social sharing. Search and related content on the site are powered by Elasticsearch, which provides near instant results to user's queries. 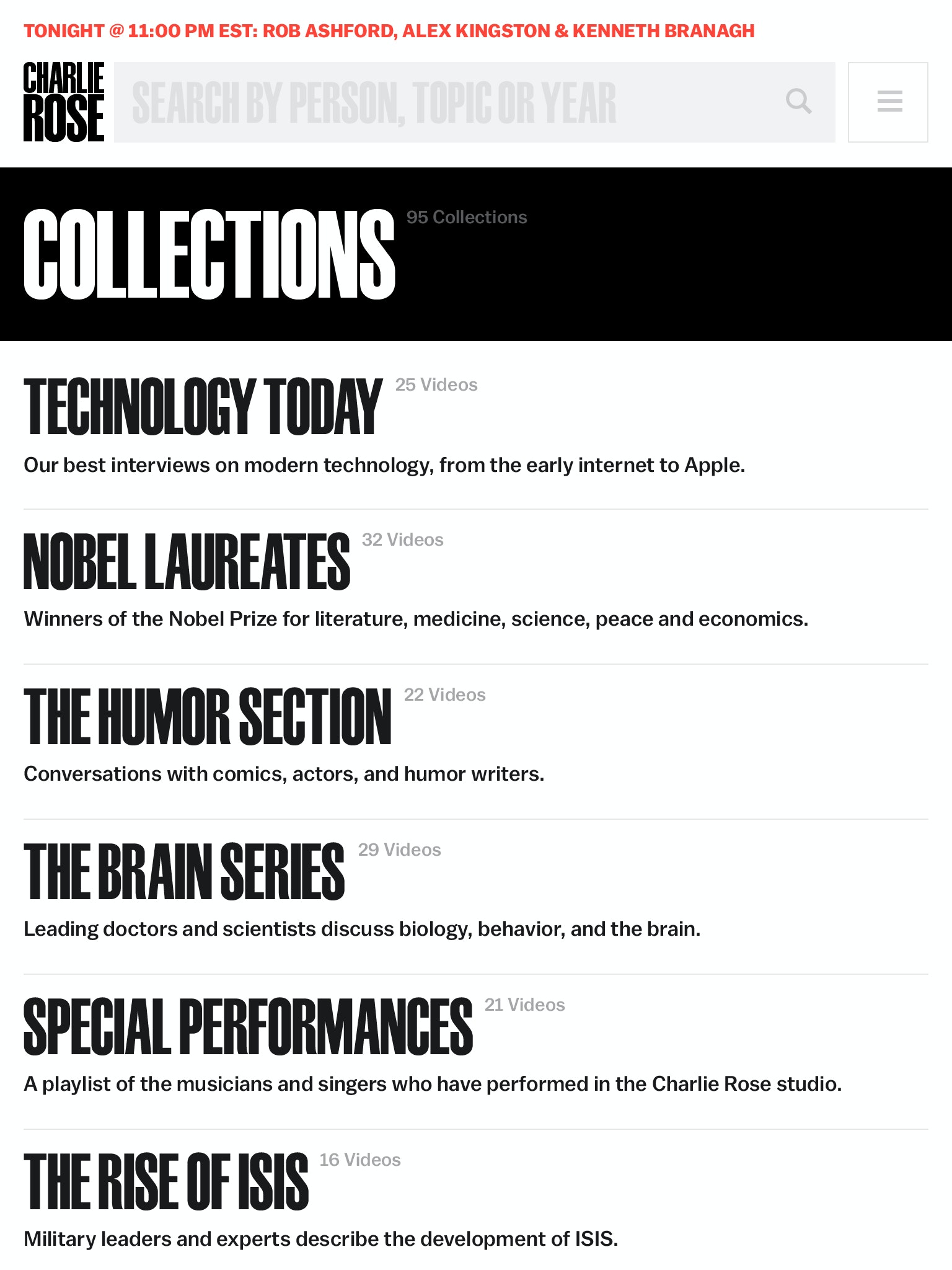 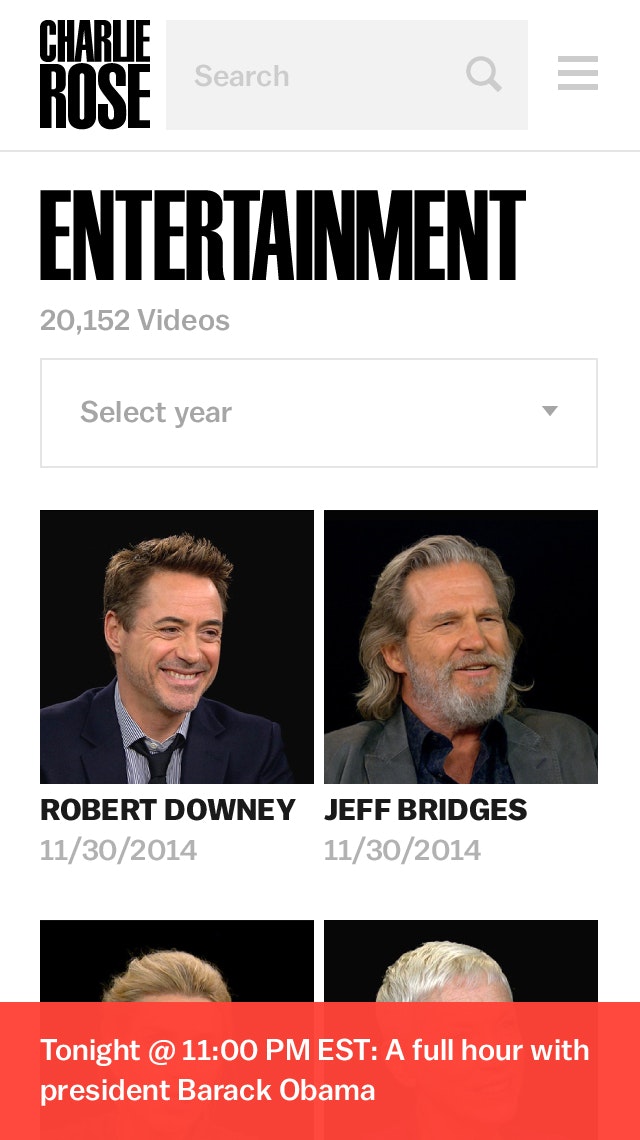 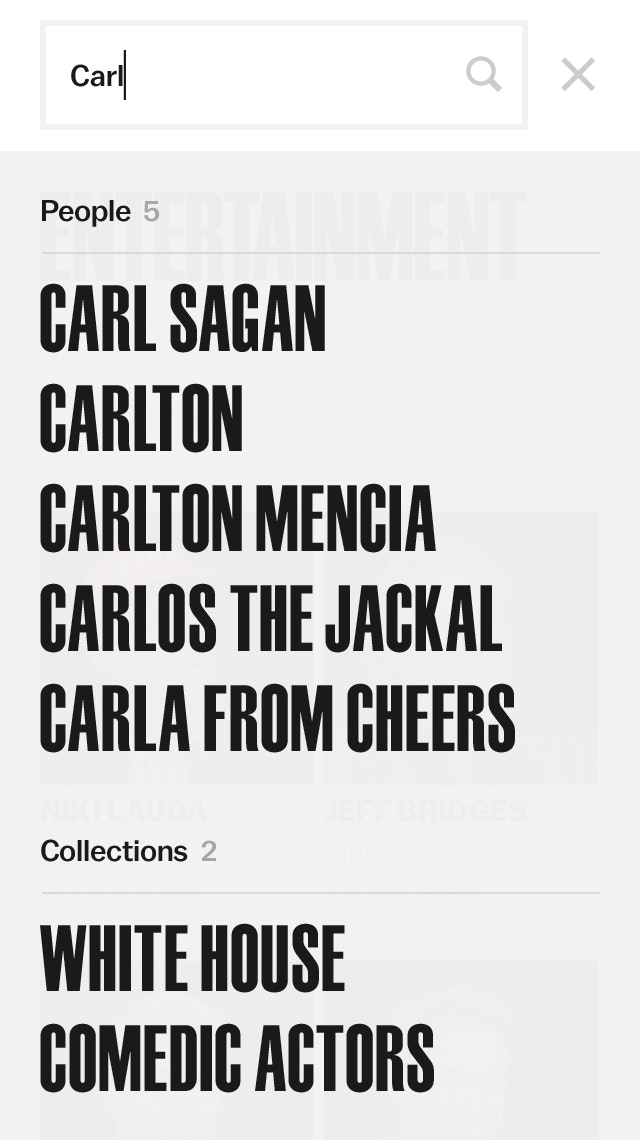 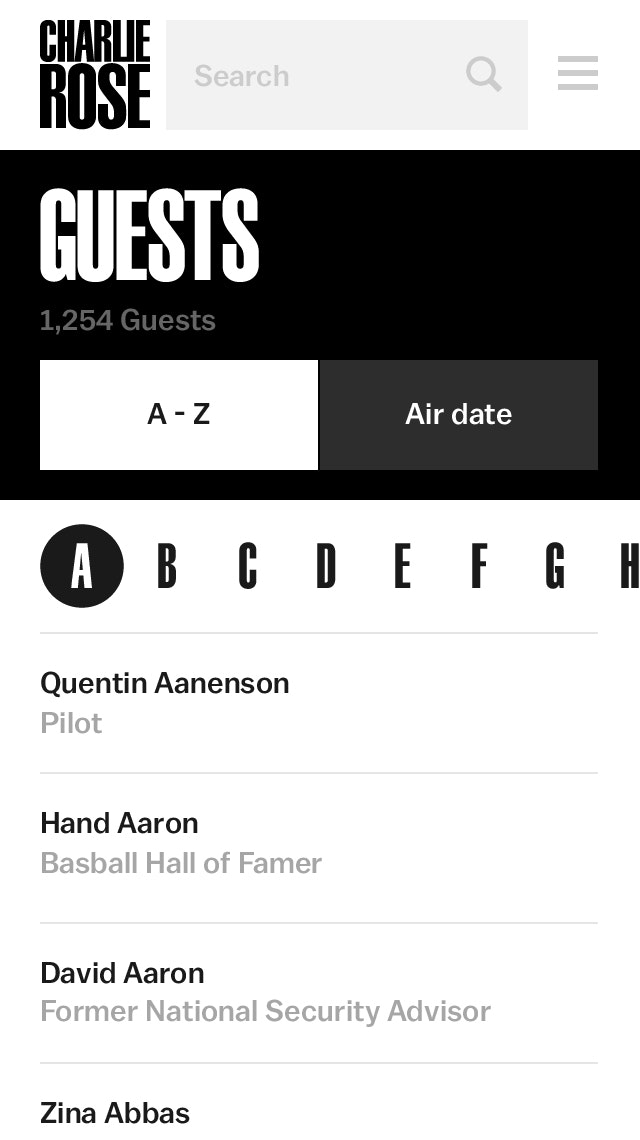 Take a seat at the roundtable

The Charlie Rose team has carefully indexed each interview by guest name, expertise, topics, and other metadata, so viewers can easily find and watch all conversations on a particular person or subject. Notable features include easy access to the archive, curated collections of interviews, the ability to create a personal watch list of videos, and the option to view a transcript that syncs to the video itself (e.g., if the user jumps to a particular transcript line, the video will sync accordingly). 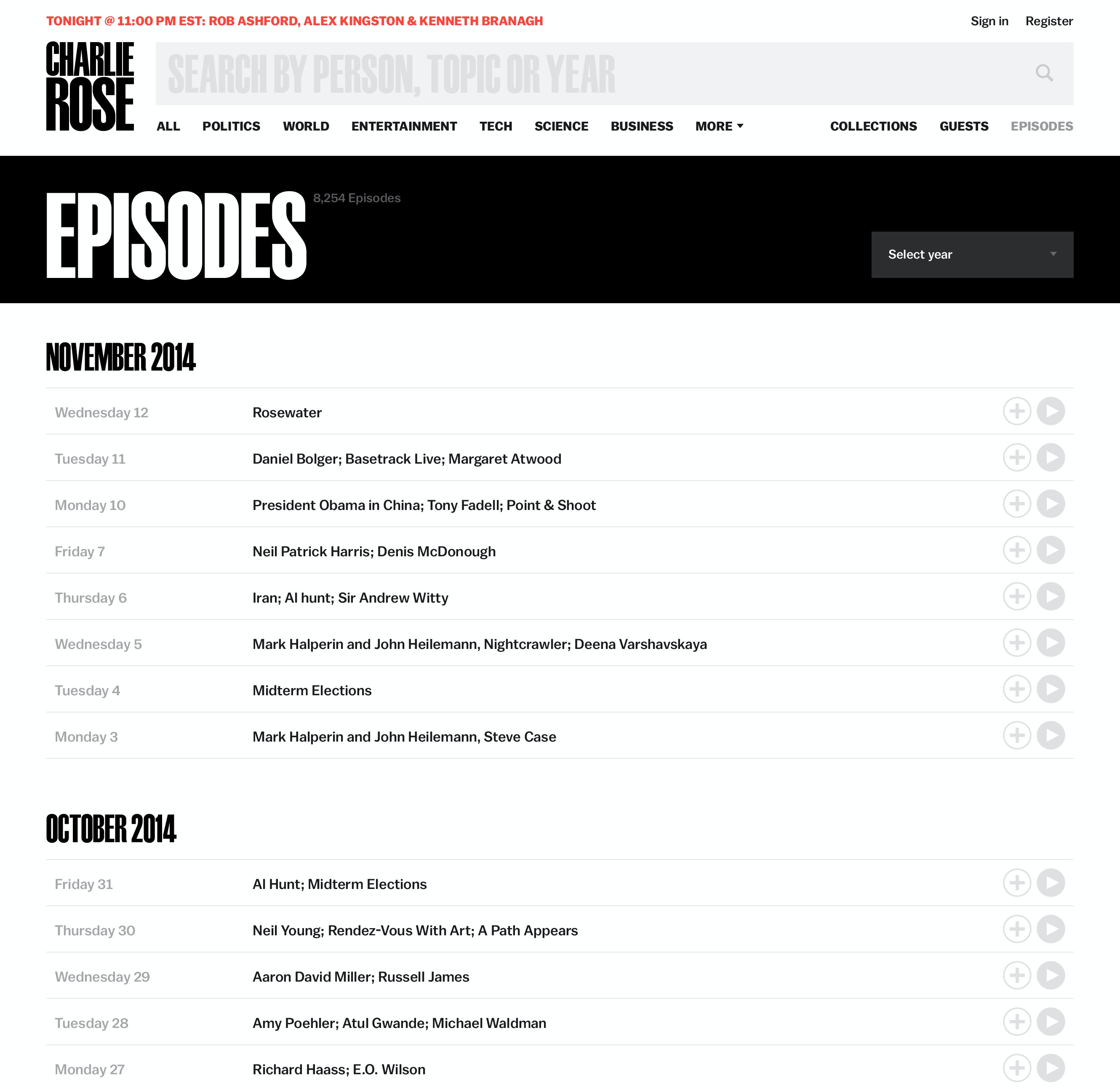 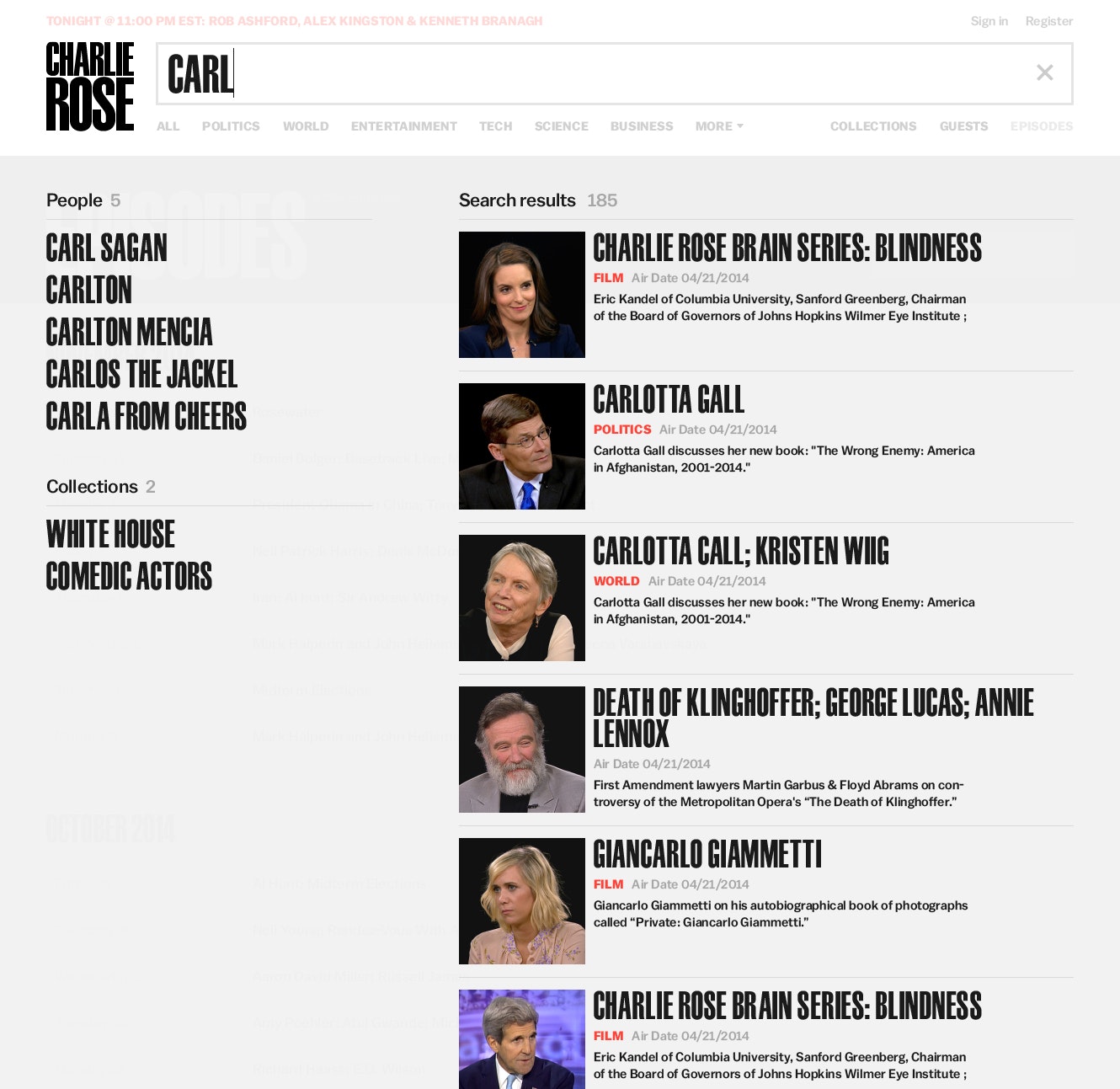 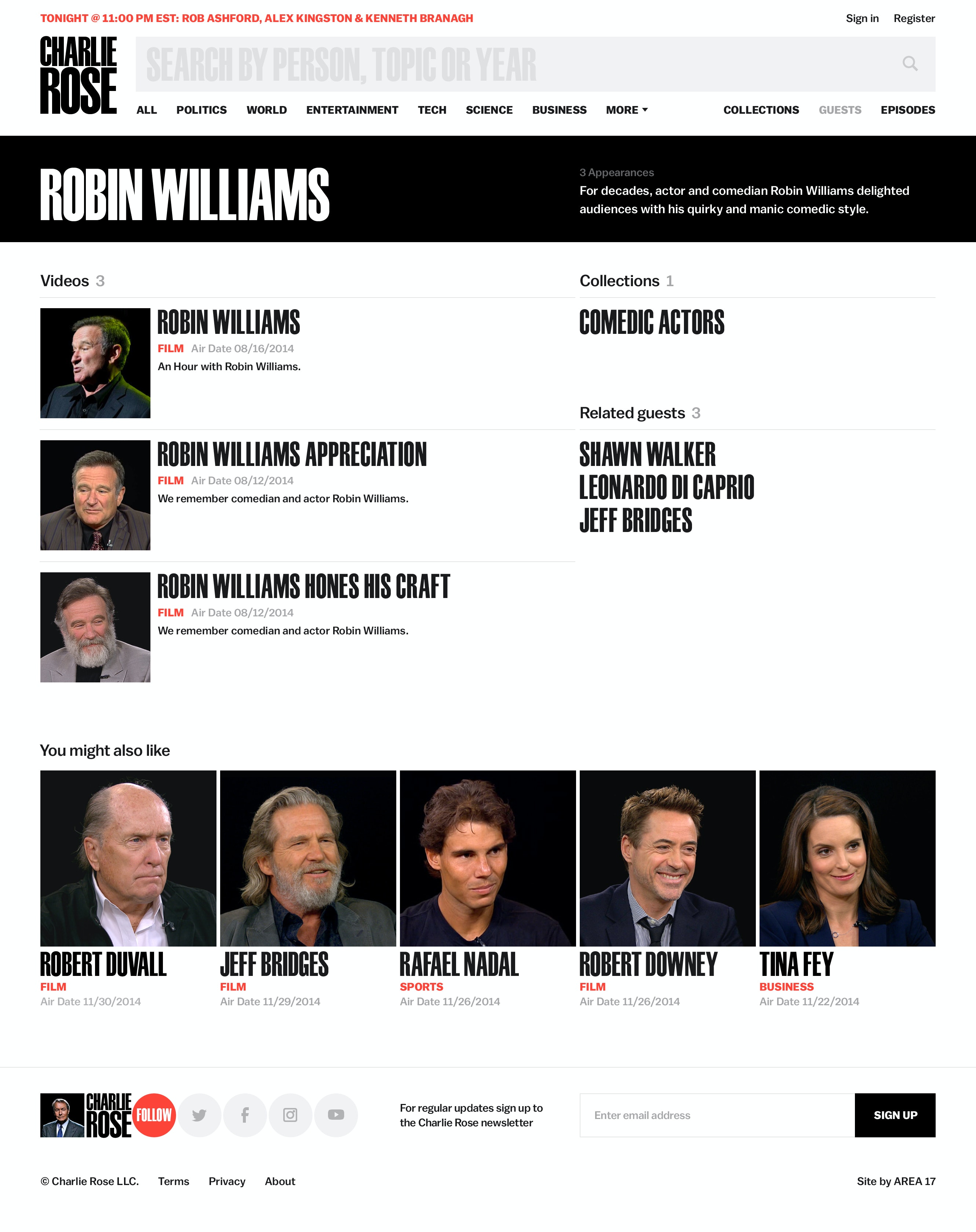